Giselle Lopez, Integrity’s Senior Data and Knowledge Manager, was recently a judge for the P2P Facebook Global Digital Challenge. The P2P Initiative is co-led by EdVenture Partners and Facebook and engages university students from around the world in competitions to counter online hate, propaganda, and extremism through creative campaigns. Through the challenge, student groups identify issues relevant to their own communities and approaches that combine digital initiatives with offline activities to drive positive narratives, perceptions, and behaviors to counter trends of hate, prejudice, and extremism. Teams received $1000 USD and $750 in Facebook ad credits, which allows participants to turn their ideas into a real campaign with measurable results. Since Fall 2016, over 450 international campaigns have been launched through the P2P Initiative, including an estimated 25% that have continued past the end of the competetion period. The event on January 29 was the culmination of the most recent P2P challenge and an opportunity for finalists to present their campaigns and compete for awards. 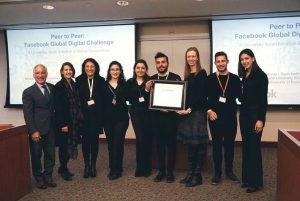 “Counterspeech on social media is often faster, more flexible and responsive to hateful content, and it is capable of dealing with extremism from anywhere and in any language .” – Facebook/EdVenture Partners

Giselle served on the judging panel alongside Monika Bickert, Head of Global Policy Management at Facebook, Brette Steele, Director of Prevention and National Security at the McCain Institute, Seamus Hughes, Deputy Director of the Programme on Extremism at George Washington University, and Dr. Jacob Udo-Udo Jacob, Visiting International Scholar at Dickinson College. As a judge of the competition, Giselle says she was inspired by the initiative and dedication of the students and all of the campaigns presented during the event: 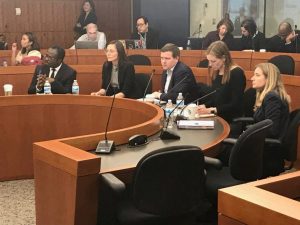 “I have been consistently so impressed and inspired by the solutions these teams of university students have been able to develop on a shoestring budget and in just a few months, and this was no exception. The success of the P2P programme illustrates the potential of working with young people to develop creative and cost-effective solutions to address complex challenges as well as the potential for partnerships between technology companies and social impact organisations to support local innovation globally. I look forward to seeing what’s next for these groups and to continuing to support P2P however I can.” – Giselle Lopez, Senior Data and Knowledge Manager

Find out more about our DKM offering here. 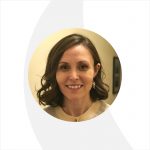