Somali journalists and media actors in the UK have called for greater collaboration with the Ministry of Information in Somalia over media reform, a groundbreaking consultation by Integrity has found. They argued strongly that media is a vital and powerful medium to support stability and peace building by fostering accountability and good governance.

“You can’t have a nation without providing peace and without reconciliation peace cannot be achieved; for reconciliation you need an informed public that can make informed decisions. It’s all interlinked.”

The consultation, named ‘Xog-Sugan UK’ and funded by the UK Government, used the passage of Somalia’s draft media law to frame a series of interviews, focus groups and roundtable events among diaspora media actors. Integrity has published the recommendations from the participants in a new report, available for download here:

What became apparent during Xog-Sugan UK was that discussion on the draft media law could not be divorced from unpacking the current media landscape, both in Somalia and in the diaspora. With few career options available after decades of conflict in Somalia, many unskilled people turn to journalism. They have almost no training and few senior journalists to turn to from whose experience they could benefit. In this fragile setting many private media owners hire young journalists, neglect employment rights, fail to respect the need for training and security and ignore obligations to provide regular pay.

Participants provided a series of recommendations for the Federal Government of Somalia, the UK Government and for other diaspora media actors. These covered:

“Somali media needs to join together and not undermine one another. UK Somali media professionals need a network in order to work together effectively.” (Diaspora media actor)

Full details are available in the report.

The full name of the project is Xog Saxaafadeed U Heelan Garsoor Aaminsan Nabad, which means ‘Informed and accurate media that reinforces peaceful governance.’ This project has functioned as a pilot to gauge levels of interest in such consultations. It highlighted that they not only provide an opportunity for diaspora communities to engage in law-making processes but also an opportunity for home countries to benefit from the wealth of experience and expertise that their diaspora communities contain. 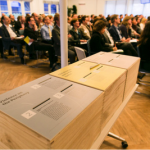