Research carried out by Integrity in the past few months has underscored the need for key parties to the currently ongoing ‘Geneva II’ conference to do more to engage Syrian civil society in the peace process. According to respondents, there is considerable scepticism regarding the conference’s likely outcomes among Syrian civil society and women’s groups, which has been made worse by their exclusion from Geneva II.

Only the National Coalition (the NC) and the National Coordination Body for Democratic Change (the NCB) have been invited to act as the representatives of the Syrian opposition. This excludes many civil society groups who are already distant from both groups. For Syrian women’s groups, the NC is even less apt to play the role of their representative due in part to poor female representation.

Integrity’s research indicates that this exclusion of civil society and women’s groups means that there is a lack of trust in the motivations of the international actors behind the Geneva process in addition to weak confidence in its potential for success.
Yet, interviews with members of civil society and women’s groups in Syria such as the Syrian Women’s League and the Syrian Women’s Network reveal increasing support for the peace process in principle.

The need for Syrian civil society to be given a voice in the Geneva process is further underscored by the fact that it is this constituency that will work on the ground to aid the cessation of hostilities. Many of these groups are also very active in their local communities and provide a much needed link between higher level political processes and people on the ground inside Syria.

he research suggests several strategies for parties to support greater inclusion. One such step is the creation of a forum running parallel high-level discussions which would engage Syrian civil society in transitional issues. Such a forum could also provide a valuable opportunity to include women’s groups and mainstream gender issues into transitional discussions, a goal that has been vocally supported by both the UN through UNSC Resolution 1325, and the UK government, as the Foreign Minister made clear in a speech last month. In recognition of this, UN Women and the Government of the Netherlands convened a meeting in Geneva with Syrian women 12 and 13 January. The women’s groups present at this preparatory conference released a Statement on Engagement in the Syrian Political Process that made clear the role they see civil society and women’s groups playing in the peace process.

Another recommendation is to support those Syrian civil society initiatives which aim to bring various sides together. Such ‘neutralist’ groups may be important in bringing consensus on difficult issues. Large women’s groups may be particularly successful, focusing on issues that are less politically charged than other areas. If Geneva II is to establish a framework for a successful peace process, civil society cannot afford to be side-lined. They must be included in a meaningful and concrete way in any transitional process that preserves their position as a third party that remains independent from political entities.

Integrity’s Policy Brief on Geneva II and Syrian Women’s CSOs has been featured on ReliefWeb and the Lebanon-based humanitarian and development portal, Daleel Madani. It can be accessed here.

For further information on this topic and our Syria work in general, please email [email protected] 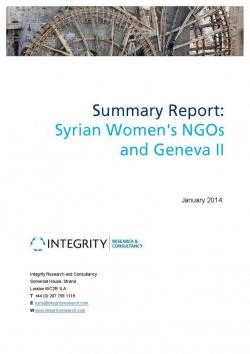 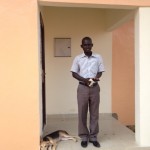