Integrity in South Sudan is in the process of implementing its second major research project for the Safety and Access to Justice Programme (SAJP), a DFID-funded security sector reform programme. SAJP works with the South Sudan Police Service at its Headquarters in Juba and in four of South Sudan’s state capitols (Wau, Kuajok, Torit and Bor), helping to establish model police stations to demonstrate effective community policing.

Earlier this year, led by Juba Head of Office Marc Buchner, and supported by Field Managers Abraham Awolich and Jessica Hayes, Integrity undertook a qualitative research programme at each of SAJP’s four sites. Aimed at elucidating the links between formal and informal security structures in each state, Integrity deployed a team of researchers and field mangers to each of the four sites to undertake a series of focus groups and key informant interviews. The results will be used by SAJP to inform its approach to assisting local level engagement with these service providers.

This week, the fieldwork component of a six site research project to update SAJPs baseline data commenced. Led by Integrity Director Andrew Cleary and James Khalil, and supported by Field Managers Zacharia Akol and Abraham Awolich and a team of 12 enumerators and 6 interviewers, Integrity is deploying four research methodologies in the four states with an SAJP presence, in addition to Beintu (Unity State) and Juba (Central Equatoria State).

In all six locations, Integrity is conducting:
a) Exit polling of the central police station
b) Interviews with police and government leaders
c) Micro-surveys of the general populace
d) Focus group discussions (in Beintu and Juba only)

Integrity is working with the South Africa-based Centre for Justice and Crime Prevention on the design and analysis phases of the project, expanding our organisations’ partnership that commenced with our earlier work led by Marc, Abraham and Jessica.

The Integrity team looks forward to continuing their work with SAJP and contributing to a more community and service-oriented police service in South Sudan.

Andrew and Abraham providing pre-research training to the team. 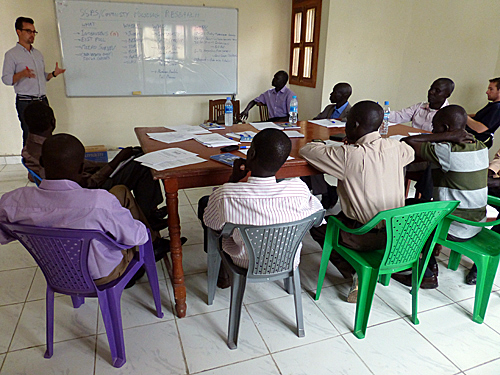 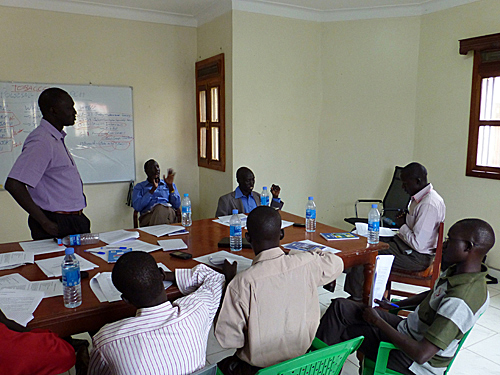