Integrity is releasing the second in a three-part series focusing on the current status and lessons learned relating to transitional justice and policing initiatives in opposition-controlled Syria.

Part II examines the variety of institutions and structures attempting to implement these various legal systems and practices, and explores attempts to build a unity among this diverse mix.

The report examines in detail the various legal codes that are being implemented, such as pre-Ba’athist Syrian Law, Unified Arab Law and Shari’a Law and examines the levels of professionalisation and implementation capacity of emergent justice institutions.

Information in this paper is primarily drawn from interviews conducted between January 2013 and March 2014. It focuses on cases from Aleppo, Idlib, and Dara’a governorates and refers to material from other areas including Rif Damascus, Deir Ez-Zor and Raqqa.

Integrity is publishing this research as part of a series to share our findings in a format that provides our Syrian partners with relevant information, usable tools and methodologies. This supports the mutual relationship we strive to maintain in our dealings with local research partners and underpins our ethos and approach to working with beneficiaries in fragile and conflict-affected environments.

The report is available in both English and Arabic. 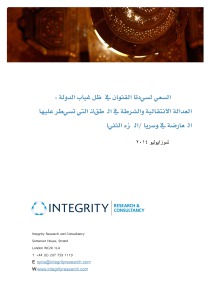 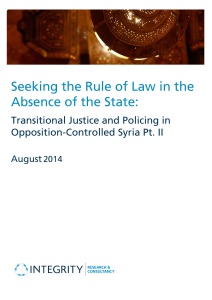 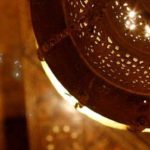